The Middle East Documentation Center at The University of Chicago

Authors of Mamlūk Studies Review articles are asked to use Unicode fonts and proper diacritics. Unfortunately, not all fonts have all the required characters. Even when a font does have everything needed, it is not always easy to enter the more obscure characters or to figure out how to get a dot under a T or Z. The fonts and keyboard layouts listed below will help to solve these issues.

While we have tested most of what follows, and we have no reason to think that any of it will cause problems, we assume no responsibility for any negative effects that might be caused to any software or hardware by downloading, installing or using any of it.

What is Unicode? The explanation at Unicode.org is a good place to begin. Put simply, Unicode is a method of programming fonts that assigns a unique code to every symbol in every writing system. Thus, no matter what Unicode font is being used, software will always use precisely the symbol being called for (assuming that the font has that glyph). In older font technologies, each font might designate glyphs with codes that meant something else (or nothing at all) in another font. This caused problems when a user changed or did not have a document's original font, leading to incorrect glyphs (or nothing at all) appearing in the place of specific characters or symbols. Not all fonts are Unicode fonts, and not all Unicode fonts have all possible characters. (Click here for an indication of the scripts currently included, and here for those not yet included in the Unicode standard.)

Users of recent versions of all major operating systems can use Unicode without much effort, and most, though not all, software supports it. Even in software that supports Unicode, the degree of compliance can vary from one version to the next. There are several methods for entering Unicode in a document, some more complex than others. In general, the older the operating system or software, the less it will support Unicode.

In most cases, use of Unicode will happen without any user effort until it comes to making sure you can enter the special characters and diacritics necessary for transliteration. That means having a font that includes them and a way to type them.

To use Unicode, you will need a Unicode fonts. Fortunately, most new fonts are in the OpenType (.otf) format, which works in all current operating systems and most up-to-date software. TrueType fonts (.ttf) are not all Unicode compliant, but most of the ones available in current systems probably are, though they do not all have every character you need (this is also true OpenType fonts: not all of them have everything).

• The MEDOC font is a modification of Jaghbub, which is Knut Vikør's legal modification of Times. The only differences between MEDOC and Jaghbub are the shapes of the ʿayn and hamzah characters. All weights (regular, italic, bold and bold italic) are included. We recommend using MEDOC when submitting to Mamlūk Studies Review. The MEDOC font does not have small caps.

• Gentium is a free Unicode serif font with all the characters necessary for transliterating Arabic, Turkish, Persian, and other languages and scripts. There are multiple versions, but Gentium Plus has the most characters and OpenType support for features like small caps that work properly with diacritics. As of 2022 the latest version includes two complete families: Gentium Plus and Gentium Book Plus, which has a slightly heavier look. Both include regular, italic, bold and bold italic weights. Gentium has become an excellent font.

• Charis is a free serif font with all the characters needed for transliteration of Arabic, Turkish, Persian, etc. It includes regular, bold, italic, and bold-italic weights. Small caps work properly, including letters with diacritics. Like Gentium it has OpenType features such as proper small caps and ligatures.

• Source Sans Pro is a free sans-serif with all the necessary diacritics. It comes in 6 weights, from extra-light to Black, each with both regular and italic, and seems to have true small caps. It is an open source typeface from Adobe, and is available for free from Google Fonts. To download, visit fonts.google.com/specimen/Source+Sans+Pro/, click "Download Family" in the upper right. You will get a .zip file with all the styles and weights. Unzip it, then install the weights you want.

NOTE: If you are using Google Docs, you can choose Source Sans Pro from the fonts menu and use it to type transliterated Arabic with diacritics. If you have a keyboard layout installed (such as Alt-Latin), Docs will recognize the keystrokes and use the proper diacritics.

• Microsoft includes some Unicode fonts in most versions of its software, but not all included fonts are Unicode. Keep in mind that the degree to which Microsoft supports Unicode is impacted both by the operating system AND the software. For example, some older versions of their software are less able to use Unicode, even when the operating system is compliant. Likewise, older versions of Windows are less compliant. In Windows XP and Windows 7, Unicode should be fully usable, depending on the software. Apple's OSX is Unicode compliant, but some software may not be. We have not tested Unicode compliance in Windows 8 or Windows 10. As far as we know, all recent versions of Adobe software are fully compliant on Windows or Apple computers. Compliance on phones, tablets or other devices is unknown and probably varies widely.

Because operating systems change frequently, it is impossible to summarize where and to what extent Unicode does or does not work. In recent years Unicode compliance has improved to the point that it should not be a problem in any major OS or software.

The potential problem that does still exist is figuring out how to type special characters that do not appear on a standard keyboard. For scholars of the Middle East, this usually has to do with transliteration of the Arabic alphabet into Roman characters.

A variety of keyboard layouts exist to facilitate this. A keyboard layout is a small piece of software that tells the computer what to do when certain keys, or combinations of keys, are pressed. In the basic US keyboard layout, holding the shift key and typing a letter results in a capital letter. The problem is that standard keyboard layouts do not have ways to type less commonly used characters.

Many specialized keyboard layouts exist to solve this problem. For example, Kino created the excellent and extremely simple Alt-Latin and LatinTL keyboards specifically for this purpose. The Alt-Latin keyboard comes in versions for either Macintosh or Windows operating systems, and is one of the simplest, most transparent methods we have found for entering special characters, diacritics, and symbols not found on the standard keyboard. These keyboard layouts are made available for download here with Kino's permission, as his site no longer exists. Installation is simple and usage even simpler.

Using the Alt-Latin keyboard does not require making any changes to the physical keyboard connected to your computer; it is simply a piece of software that tells the computer what to do when you press a key or a combination of keys. As long as you are typing in the Latin alphabet (i.e., in English or most other European languages) you will not have to change from Alt-Latin to another layout. As can be seen in the diagrams below, Alt-Latin's key layout is identical to the standard US QWERTY keyboard. If your ordinary keyboard is different from the US standard layout, it may take some effort to get used to these. Spend some time with a search engine and you may find keyboard layouts that match your usual one.

• Alt-Latin for Macintosh (We have not tested this on any Mac newer than approximately 2010.)


• Alt-Latin for Windows 7 (In our tests, this works in Windows 10. See Windows 10 instructions at the bottom of this page.)

• LatinTL for Macintosh (Mac only) was also created by Kino and is almost identical to his Alt-Latin, with a few differences (see below). It is very old at this point and we do not know if it still works in more recent versions of the Mac OS.

The following diagrams illustrate the usefulness of the Alt-Latin keyboard.
To download the maps (as PDF) click HERE for color or HERE for black and white. There is also a diagram showing just the key combinations we use the most for transliterating Arabic. Get the PDF in color or black and white. Or just click the images below. 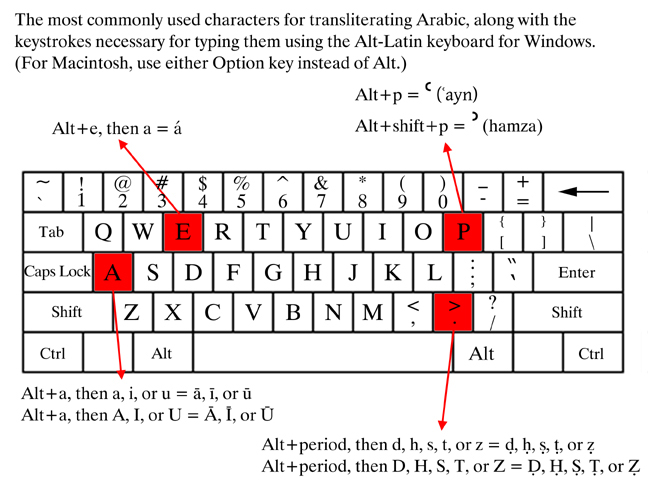 The black and white versions: 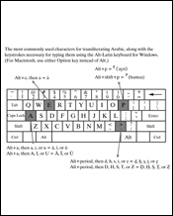 To type the dotless lower case i or the capital I with a dot using the Alt-Latin keyboard: type option+w followed by either i or I.

Though we can't guarantee that it will work in all versions of Windows 10, we are using it on many computers. Here are the steps we followed to enable it. (As always, we make no promise that this will work for you and we are not responsible for any problems you may cause by following these instructions.)

• After downloading the Alt-Latin .zip file and expanding it, double click on setup.exe to install it.

• Once the message appears on screen saying Alt-Latin has been installed, go to the Windows Control Panel (if you don't know how to find it, use the search box in the toolbar at the bottom of your screen). In the Clock, Language and Region section click on Change input methods.

• A list of languages will appear. It may have only one entry; ours says "English, (United States)."

• In the Input Method section there should be two entries: your computer's default method (ours says "US") and Alt-Latin. The one that's at the top of the list is the default. If you'll be using Alt-Latin and want it to be the default method, follow the next few steps. If you only use it occasionally and want the default to remain unchanged, skip down a few steps to enable the language bar.

• If you want the old method to remain available, you will need to click on Add an input method and select it. (Use the search bar at the top to find it if that helps.) Click on the Add button and it should reappear in the list below Alt-Latin. (We had to do this twice, as it reappeared at the top of the list the first time.)

• If you will be switching between keyboard layouts, you will need to enable the Language Bar.

• On the Control Panel's Change your language preferences page, click Advanced Settings (on the left).

• Find Use the desktop language bar when it's available and click the box so a check mark appears.

• A small image of a keyboard will appear in the taskbar at the bottom of your screen. Hovering over it will show what keyboard is currently active. Click on it to select from the available methods. On our computers, Alt-Latin is the default, but we could select US if we needed to.

It is entirely possible, and even likely, that the way Windows does things has changed since these instructions were written. We are not able to test every version, so you may have to experiment and dig around to make this work.